Resistance is the observable unwillingness for someone to not cooperate. People deny cooperation for many reasons, some of them truly useful to advance an initiative to something better. When done well and engaged into a process, this type of resistance is useful when done in a generative manner. As an idea evolves toward cooperation, groups commit to a common purpose or outcome. Most efforts to enroll others focus on the outcome – as if having a perfect or noble outcome is reason enough to gain cooperation. While resistance may be associated with disagreement about the desired outcome, most often the nature of the resistance lies in other, more subtle and personal, areas.

Disharmony often is the result of a conflict of interests. People participate in an endeavor because of overlying and agreed-to interests. The interest may be economic payment and value. The interest may be the desire for personal expression. Interest also may relate to one’s attempt at personal control and independence. Moving with disregard for the interests of the participants and stakeholders of an endeavor will produce resistance, often perceived as unintended.

Recognizing and attending to the interests of the parties involved will reduce resistance through building support in three key pillars: The interest of safety, power, and self: 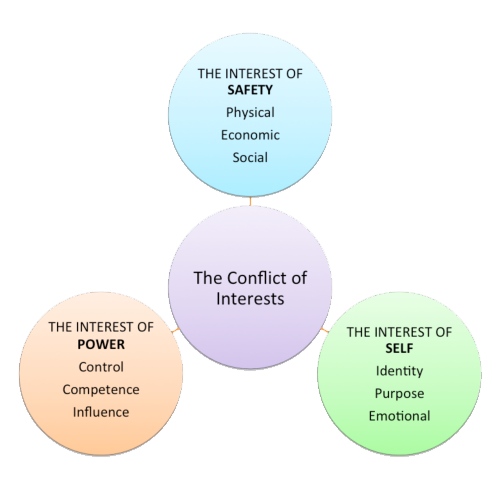 The Interest of Safety
It is natural for any organism to place its own safety as paramount. While modern society may have eliminated many of the risks of survival, such as access to food or communal and governmental defense, the human body is wired to constantly attend to its own safety and to the safety of its family, clan, tribe, or other communal structure. Nothing is more fundamental to producing resistance then triggering a concern for safety. First and foremost is a sense of physical safety. In the workplace, this includes feeling physically safe (including no advantage based on ethnic, gender, or other such basis), being free from physical harm, and being free from real or imagined assault (assault representing a threat of harm). In a modern society based in a complex economy, the threat of being able to produce economic value and thus sufficient economic wealth to feed, house, and tend to the self and family also are foundational to a sense of safety. Lastly, there is a strong need for emotional security for people to feel safe in a social work environment. Emotional threats are no different to the body then intellectual threats in terms of one feeling safe or in danger.

The Interest of Power
Humans seek to have power over themselves and their environment. There is not a moral assignment to power in the context of people feeling that their interests can be attended to. Rather, power is essential to people feeling as though their interests can be advanced. Oftentimes people look to organizational charts or other outward positional bases of power, yet this readily can be misleading. Power involved control of the self and the ability to access and persuade others. Power can be as straightforward as being able to manage the self effectively and have a sense of personal worth and purpose. People will feel in a state of dis-ease if they don’t have some sense of control. Other factors affect power, including competence, influence, and access. Competence is a key component to power; people who have access to competencies relative to an endeavor will feel more powerful than those without the related competencies. Access to, and competency in, influence also is a key basis of power.

The Interest of Self
The human being is an individual entity in the universe. Why it exists, how it has purpose, is a key interest to the human entity. Humans build and maintain an identity that grows internal esteem and external access. Humans then socialize their identity and purpose. Assaults on the internal sense of self or how this sense of self is actualized amongst other humans will trigger resistance. That is, if a proposed endeavor puts the self at risk or challenges the self-identity, people may resist participation. Higher-order needs come into play, including Self-Actualization. In some ways, this is the most fundamental requirement in managing resistance, is in appreciating the needs of the individuals in the initiative and how those human needs connect to the larger efforts. Investment and support of the interests of the self can build a resilient individual and strong commitment toward an endeavor.

Engaging the Resistance
Leaders step into the resistance and share power. The sharing of safety references how an organization and individual can align and defend physical, economic, and social constructs to produce sufficient safety that people will organize around opportunity instead of safety. The sharing of power includes building competencies and influences throughout an organization in support of its initiatives. Controls that support safety can reduce resistance; controls that align and concentrate power away from individuals active in an endeavor will engender resistance. The sharing of self requires that individuals and organizations align their identities and purposes in ways where people not merely go along with an organization’s efforts but champion them because they have a strong sense of alignment of their own identity.