The doldrums is a nautical term referencing windless conditions.  As the National Oceanic and Atmospheric Administration tells us, this belt near the equator is officially called the Inter-Tropical Convergence Zone, “ITCZ” and pronounced as “itch” – how appropriate!  In sailing, it was known as a place where sailing ships encountered such calm waters and winds that ships became stuck.  People, teams, and businesses also get caught in the doldrums, this place of no wind. It brings a sense of meandering without direction and a listlessness that discourages people from hoisting the sails or dropping the oars into the waters.   A storm is preferable to the doldrums, as a storm defines actions.  The doldrums encourages waiting, and waiting more, as if time would intervene with some brilliance. 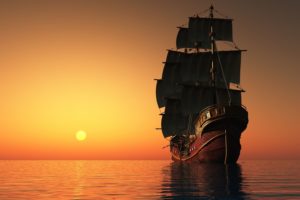 Leaders do not wait.  They certainly use time and will grant it where needed:  Another meeting to gather meaningful input from constituents, time for training and development, or additional computing of data into information. In the doldrums, creating the wind is the responsibility of the leader, in the form of direction, filling uncertainty, building engagement, accepting the risks of action, and declaring direction.  Sometimes, the leader places an oar into the water in full sight of others so that it is clear that it is time to row – time to take action.

When the wind fails, then put the oars in.  Have robust conversation.  Take action.  Go for vigorous walks.  Stop reading the articles where everyone is saying the same thing.  Read something challenging.  Participate in a conference outside of your industry or field of expertise. Do something new.  Reward action.  Remove personal risks for others.  Seek coaching.  Laugh heartily at yourself.